What Is Mobile Commerce?

“Person on the street” answer: Making purchases at your usual ecommerce stores via your smartphone or tablet.

What is mCommerce? (And why you should know!)

Well, sure. But that’s a bit like describing Van Gogh’s Starry Night as “some painting.” There’s more to the promise of mobile commerce than that. Much more.

To better know the mCommerce future, let’s first cover the eCommerce past.

Today’s e-business: Reflections of the Past

Set your way-back machine for 1999. Most people were on dial-up. “Y2K” was the buzzword du jour. And an enterprising startup named “i-mode” was providing our pre-smartphones with access to rudimentary games, ring tones, and the weather.

Never heard of it? You’re not alone. It never gained any real traction, outside of Japan. But, an important Web marketing seed was planted.

Let’s fast-forward to 2007. The iPhone is born. The mobile payment seed sprouts and reaches for the ecommerce sun. Like all young saplings, it needs some time to mature. But mature it does—and quickly.

In 2010, only 2 percent of total U.S. commerce went through a mobile device. But since then, it shot past 8 percent on a proverbial J curve. So far this year, over 40 million Americans have visited Amazon via a mobile device, with Walmart and Target coming up fast.

Today, we have more than just smartphones. There are tablets galore with more on the horizon. And oh yeah, there’s something called the iPad. Apparently it’s popular with a few college kids somewhere…or so we’ve heard. (We kid, we kid!)

Ecommerce Web Site Design: Are You Too Late to the mCommerce Gate?

Mobile commerce isn’t going to be big one day, it’s there now. It takes many shapes and sizes and forms: NFC, virtual wallets, and showrooming. The public is primed and so are their dollars.

Tablets are leading the charge. People love them. People use them. Web use on them is up 300% from last year. And, tablet users fit the prime demographic of 18-34 with 29% of them earning more than $75,000 annually.

But this is really only getting started so it’s easy to imagine where we’re headed. 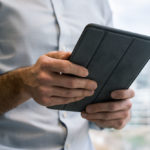